So last week Trevor and I were woken up by the sound of our neighbors house alarm going off. We really didn't think much of it because my parents were just telling us that during the summer their alarm was going off like every other morning and my parents eventually walked over there and shut their breaker off. No one is really living there right now because someone bought the house and is completely reconstructing the inside of it; so there was no one there to shut it off during the summer months or now. So it went off for a good ten minutes or so and then eventually stopped, so we thought all was well again. Well we were both getting ready and I had to take Winston outside before we both left for work. When I was outside walking him another house alarm started going off a few houses down. And then I heard a bunch of police and random sirens going off. So by this point I was a little freaked out, but again, I didn't think too much about it.

Eventually Trevor left for work and called me and told me I needed to find a new way out of the neighborhood because a house 2 doors down was surrounded by police and channel 6 news was even there; therefore the road basically blocked.

As we were driving a different way out of the neighborhood there were police at basically every stop sign and every entrance of the neighborhood, so at this point, my curiosity was killing me. I was substituting this day, so basically between every class I was checking my phone to see if Channel 6 news had posted anything online.

We never found anything out until that evening and here is the story...There is a family living in the house and one of the children called the cops because of domestic abuse. When the cops got their they discovered a meth lab in the house so social services took the children and the parents went to jail (for like a day). I guess there are more people than just the family living in the house because one of the meth lab worker people ran from the house when he found out one of the kids called the cops and apparently he was running around the neighborhood breaking into houses trying to hid from the cops (hence the alarms going off as Trevor and I were trying to get our last 10 minutes of sleep). So I'm outside walking my little foo foo dog as a man is running around trying to hid from the cops just houses away...not cool!

Now, my parents don't live in the ghetto, they live in a pretty nice neighborhood...so I was somewhat shocked to know this was going on in our neighborhood. Plus, every time I drive by the house I always go a little slower just so I can see if anything crazy is going on inside. I have almost been caught a couple times because the lady that lives there is outside smoking quite often. I try not to be too obvious!
There are some crazies in this world!

On a lighter note...my little foo foo puppy was extra needy today! But he is so cute!!!! (Every post needs a picture!) 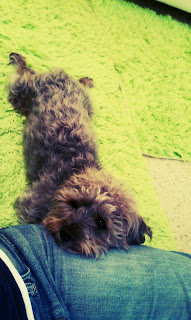 HAPPY WEDNESDAY!
Posted by Trevor and Jillian at 2:53 PM