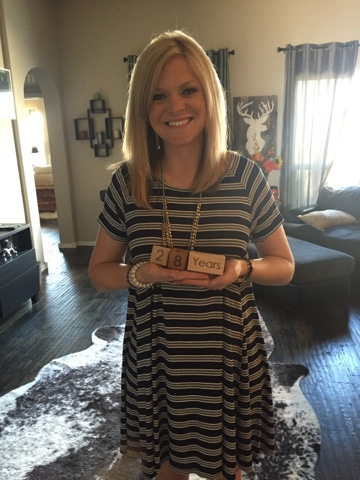 My sister-in-law bought me these cute blocks clearly for the baby...we were just being silly! ;)

I seriously have the BEST husband!!! Yesterday was totally unexpected but so special. Normally we plan something weeks before my birthday and I'm in on the planning, but not this year. Well, I thought I was but that plan doesn't start til today. I had planned to go to work on my birthday just like it was any other day and then the celebrating would start Friday. Trevor had other plans...he is good! Last Sunday he told me to take a personal day this Thursday..I was already taking a personal day Friday, because as I mentioned, we planned for the celebrating to start today. But I went ahead and listened because who doesn't love a surprise! Trevor wouldn't give me any hints all week. I had no idea what was up his sleeve.

I need to back up to last weekend for a moment. Trevor went out of town with a friend last weekend to go a work party/event in Dallas. His friend lives in OKC, so Trevor just had to drive to OKC and then his friend would drive to Dallas.  Jokingly, I said the only way he could go was if he ran by IKEA to get a rug I had been wanting. I was definitely kind of serious. ;) We don't have an IKEA in Oklahoma and we had no plans to go to a state with an IKEA in the near future, so I figured this was a great compromise. He agreed and was on his way. On Sunday when he got home I was so excited to see my new rug! However Trevor said that he accidentally left the rug in his friend's car which is obviously in OKC. However, his friend was coming to Tulsa this weekend, so he would bring it to us. I asked a million questions about the rug - price, size, exact color, where it would fit best in the room I was planning on putting it in and Trevor had an answer for every question.

Fast forward to Thursday 3/3. The night before, Trevor gave me two pieces of info. I needed to be able to leave the house by 6:30 and that one of our destinations was in Kansas. I was pretty confused at this point but I went along with it. We left the house at 6:40ish and headed to our first stop. Our neighbors own a coffee shop in Owasso that we had never tried before, so since Owasso was on the way to Kansas, Trevor thought that would be a good breakfast spot. It was delicious. If you are near Owasso, hit up The Misty Brew Coffee Co. Then we were on our way. When we were about half way there Trevor told me about our next stop. He said we were heading to the IKEA in Kansas City. Obviously I was confused since he just went to one last weekend to get the one thing I wanted from there. It turns out that they didn't go to IKEA at all and he made it all up! He was pretty invested in this lie! So off to IKEA we went. Not only did we get the new rug I wanted for our bedroom, but we got new curtains for our bedroom, new rugs for the kitchen, some office stuff for Trevor's new business (I'll save that for a different blog) and some baby stuff. We always get in trouble at IKEA! Next, we ate some lunch. We just looked on zomato for good lunch restaurants near us and we found a place called Twisted Fresh. It was definitely delicious! At lunch Trevor revealed our next stop...the outlet mall! This next stop was just as much for him as it was me. Basically, we will be going through some major life changes soon...of course the baby, but also Trevor only working part time for Samson and him starting a business (again...I'll save that for another day!) So, Trevor had allotted so much money for us to spend and kind of "go crazy" before we need to buckle down and really get serious about budgeting again because of all the major life changes mentioned before. So that's what we did. We only had a couple hours at the outlet mall before we had to head back to Tulsa for our dinner plans, so we were fast and efficient shoppers. I now have several outfits to wear while pregnant, but I can also wear them after. I guess he got the hint every morning when I would say "I have nothing to wear!" It will at least get me through school before the summer months start and I can wear all comfy clothes.

This is the only picture I got all day...our backseat filled with all our stuff! 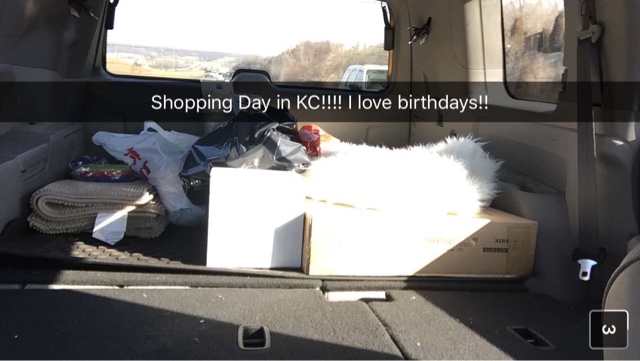 Sorry for all words and no photos! That's so unlike me!

When we got home we headed straight to the Cheesecake Factory. We had plans to meet my parents there and one of my best friends Ashley, whose Bitthday is on the 5th! We always celebrated together in college, so I loved that we got to be together again this time of year!

Now we are off to our next Birthday adventure! Oh, and because I'm a math teacher I always have to find the hidden numerical irony of the day...I turned 22 weeks pregnant on 3/3. I love double digit numbers!

THANK YOU for all the Birthday wishes!!! I loved every text message, Facebook post, picture, etc! You all know how to make a girl feel special!

Posted by Trevor and Jillian at 5:22 AM