The most EXCITING NEWS!!!!

WOW! This baby was PRAYED and PRAYED and PRAYED for! Trevor and I knew we wanted a third baby and we actually tried for over a year for this. We really liked the idea of having all our babies pretty close together because we saw the bond that Brooks and Rhett had. So last July (July 2018) we started trying. After months of nothing I went to my OB/GYN and was told there were some issues. We were basically dealing with a REALLY small chance of getting pregnant. So, we tried a couple things and nothing seemed to work. By the end of it, we were told there must be something more wrong because the medication should have worked and if we wanted to investigate further we'd need to see a fertility specialist. This was back in February 2019. I kind of came to terms with if God really wanted us to only have 2, then so be it. And if he wanted us to have 3 he would make it work without having to spend an arm and a leg at a fertility specialist. I know fertility specialists are amazing and are working with so many of my friends, but in my head, I already had 2 beautiful babies and I was really okay with giving that desire for 3 to God. To be honest, we stopped trying and we really came to terms with having only 2. I was actually getting used to idea and loving the next stages of life we were entering with Brooks and Rhett, but I would occasionally have that thought again that I really wanted 3 kids. I tried to just pray in those moments and trust God with whatever the outcome might be.

On Sunday, September 1st I sang at church like any normal Sunday, but I was TOTALLY out of breath! I was leading the last song and it took everything in me to get through that song when normally this is not an issue. I chalked it up to being tired. Trevor and I stayed up really late the night before watching some show that we got into, so I really just thought I was extra tired on Sunday. Fast forward to Monday night and I had to get up to go the restroom about 3 times during the night. Now, this was WIERD because I'm an amazing sleeper! Haha! Tuesday, the boys and I went for a walk and then I needed to go to the grocery store after. On our walk I went back and forth 100 times on whether to buy a pregnancy test or not. I really didn't want to take another test and see a negative result. That really wore on me in the months that we were trying and it was the last thing I wanted to do again. Ultimately I decided to go ahead and buy a test, but a REALLY cheap one because I didn't want to waste any more money on those darn things. To my surprise, a positive test came back and I'm pretty sure I cried and leaped for joy! Haha! I was SO excited!

I debated all day on how to tell Trevor and decided to write a funny saying on our text board. The back story behind this is I tried ALL SUMMER to get rid of our baby clothes. I tried to have a garage sale on 3 different occasions, twice it got rained out and once Trevor said he didn't want to do it the night before, so we still have all the baby things! So, I wrote this on our text board. 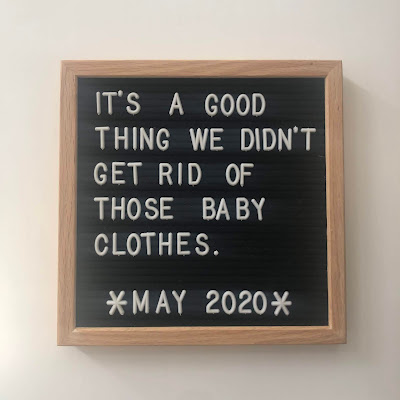 We got to go to the doctor for the first time on September 11th and see that sweet baby and it's heartbeat! 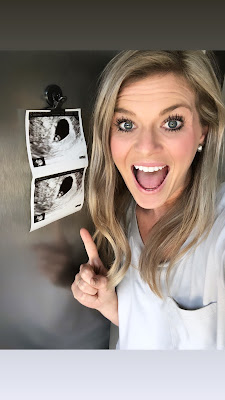 It's been such an exciting pregnancy! I am TIRED and have been pretty sick, but overall, I'm just feeling extremely joyful and blessed!!! What an amazing answered prayer!!!!
Posted by Trevor and Jillian at 1:04 PM