I Love When Friends Visit

Trevor and I LOVE having company, especially when they are some of your very best friends!! On Friday my very best friend, Nichole and her boyfriend Stephen, flew into Tulsa. When they got in town we came back to our house and let them get settled in and we just spent some time catching up. When lunch time rolled around we took Nichole and Stephen to Main Street Tavern on BA Main Street. As always, it was delicious! We didn't have much planned for Friday other than to hang out, so we came back to our house and got in the hot tub for a bit! It was really neat because it was snowing basically all day Friday and Saturday, so we were in the hot tub while it was snowing...it was so pretty! We then watched the Voice. We all watch it normally, but no one had watched it from that week, so we got caught up. That night we grilled out. It was definitely interesting in the snow! Trevor pulled the grill up right by the back door and stood inside while working the grill. I wish I would have gotten a picture of that! We had a delicious dinner of steak, asparagus, corn on the cob and cheddar bay biscuits. YUM! After dinner we got our Ping-Pong table set up in the garage and borrowed our neighbors amazing heater that literally heated our garage in about 15 minutes! We played some Ping-Pong and Darts. We were definitely all pretty good competition for each other. 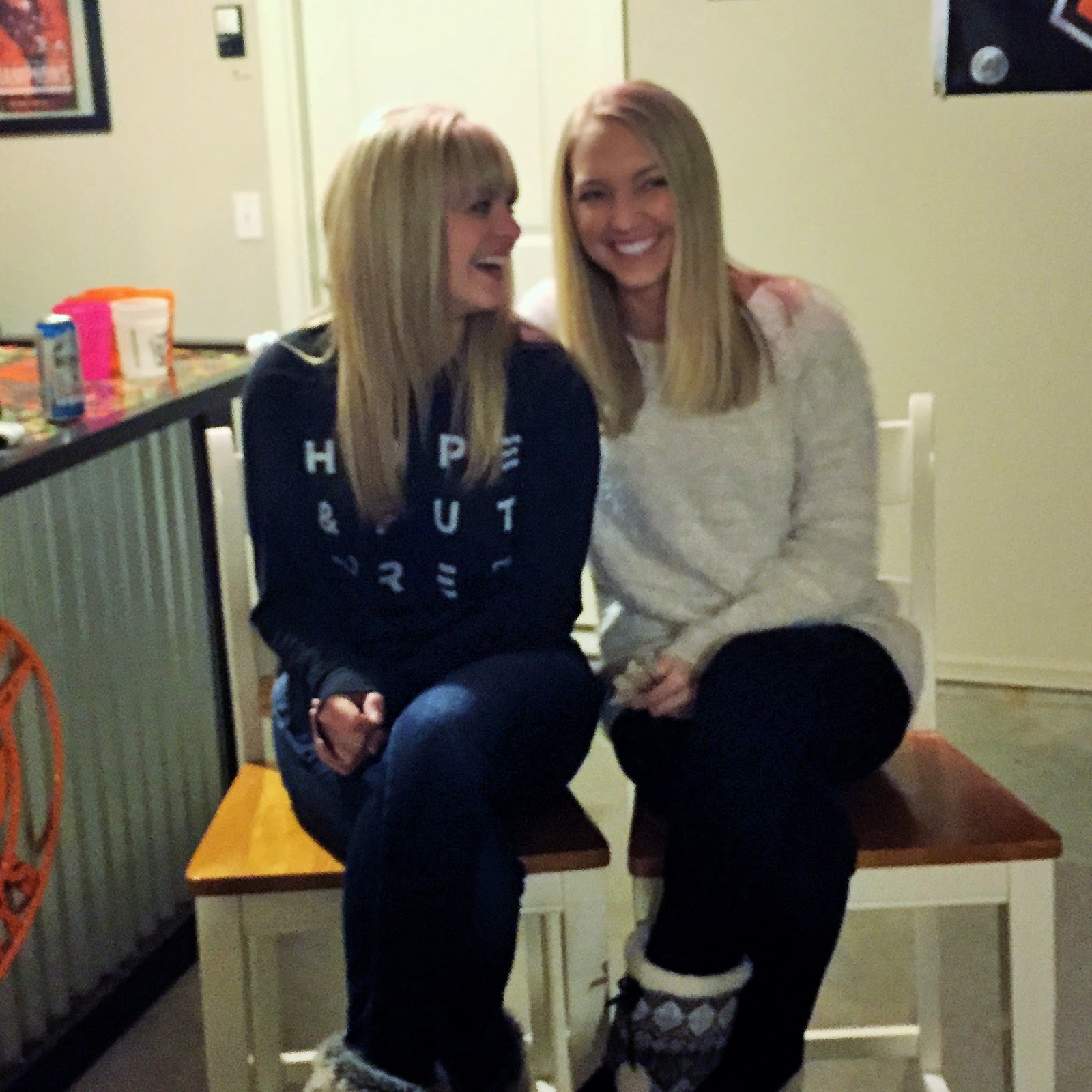 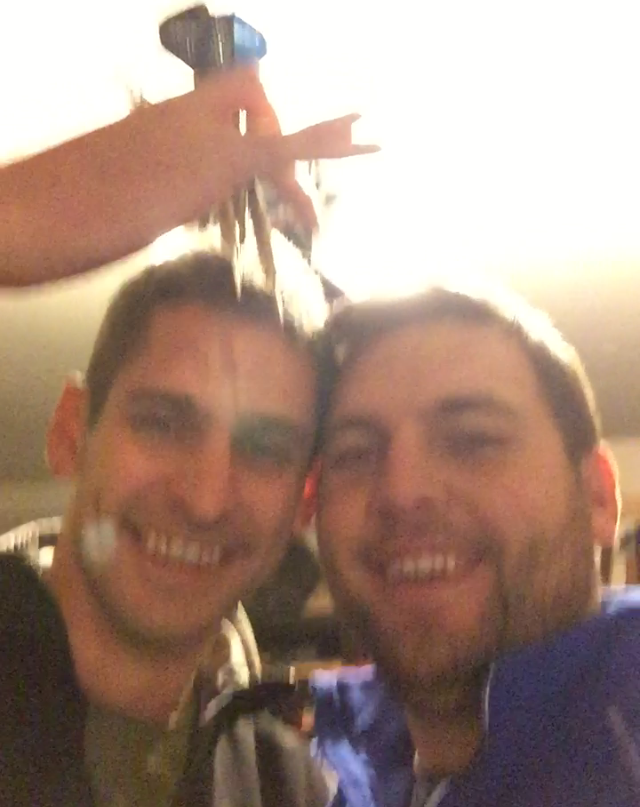 Later Friday night our neighbors Randy and Cassie came over to play Battle of the Sexes. We were pretty even until Cassie left, then the girls fell apart!

The next morning we all slept in...well Nichole and Stephen slept in a little later than us, so Trevor and I decided to sneak in a little binge watching of House of Cards (so excited the third season just came out!!). Once everyone got up and around, we decided to battle the snow... 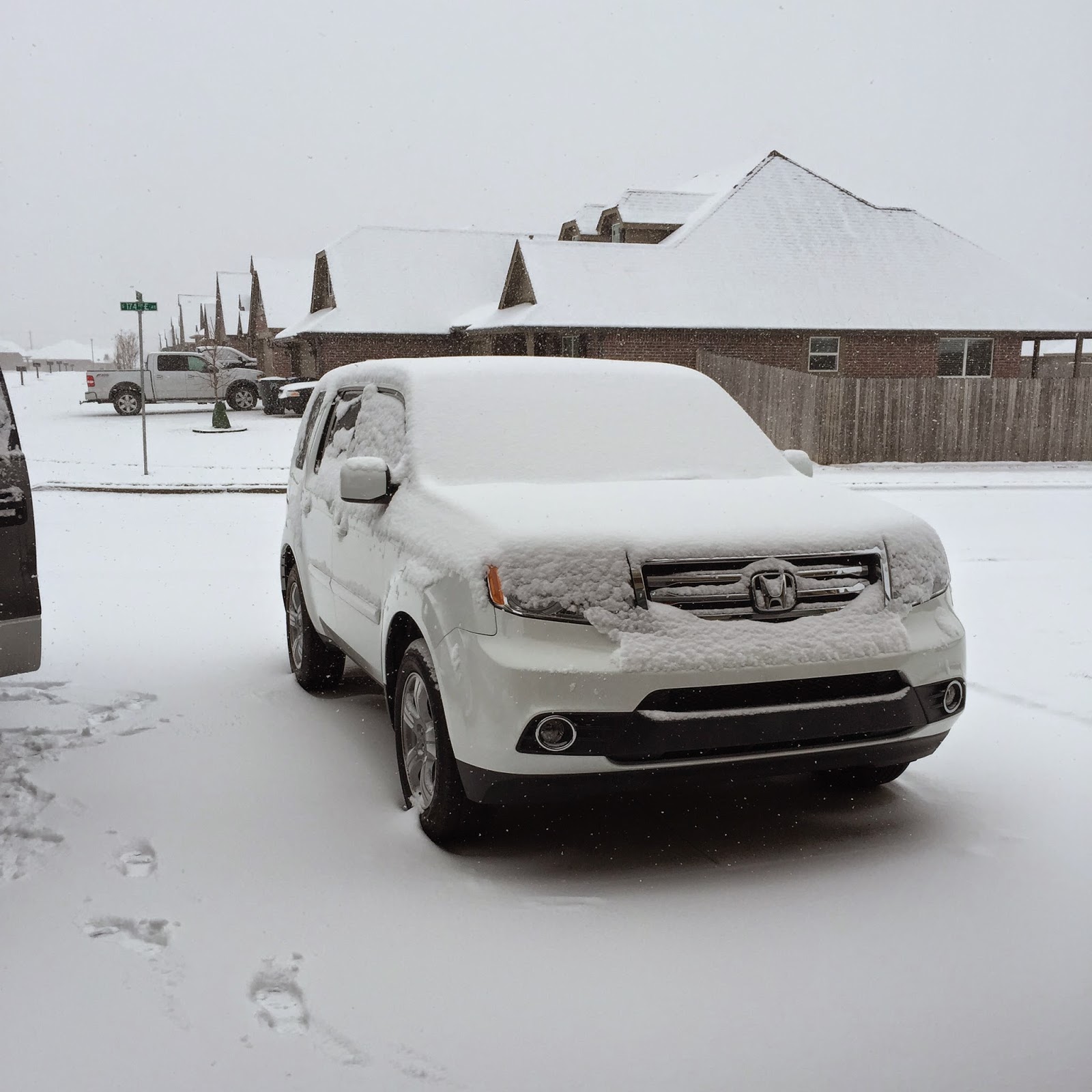 We headed to Cherry Street to eat some brunch at Smoke. We went from starving to completely stuffed in about 10 minutes! I just love their Chicken and Waffles! 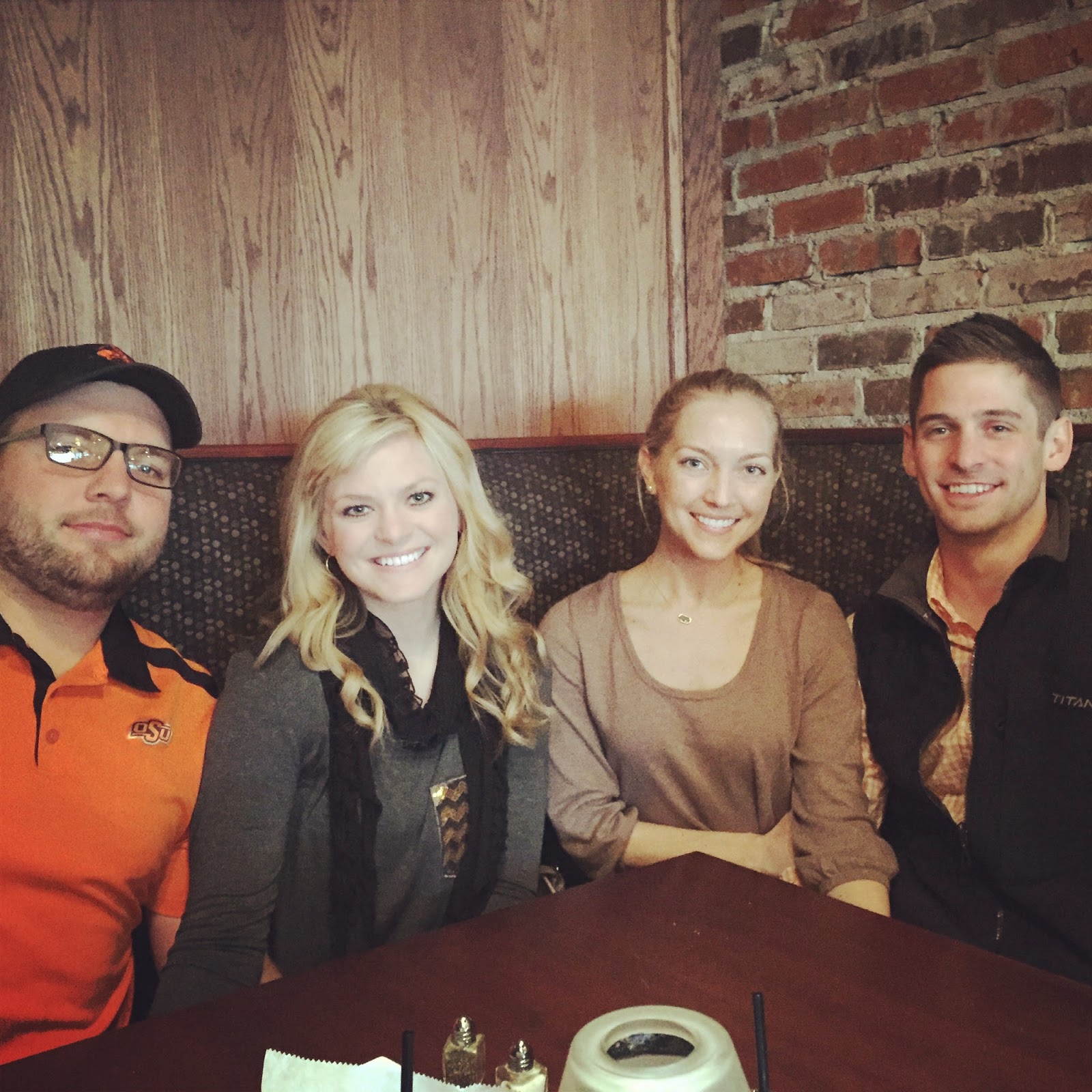 With the snow and crazy weather, we decided we wanted a, relaxing on the couch, kind of afternoon. We decided to watch a movie on Netflix and it was terrible, along with most Netflix movies. We watched Labor Day, and I definitely recommend not watching it! The boys planned it all pretty well though, because the movie got over just in time to watch the OSU game. When the OSU game got over it was time to head to the Warren Theatre! Trevor and I had not yet been there, so we decided to try it out when Nichole and Stephen were in town. We ended up getting tickets to Focus in the balcony. 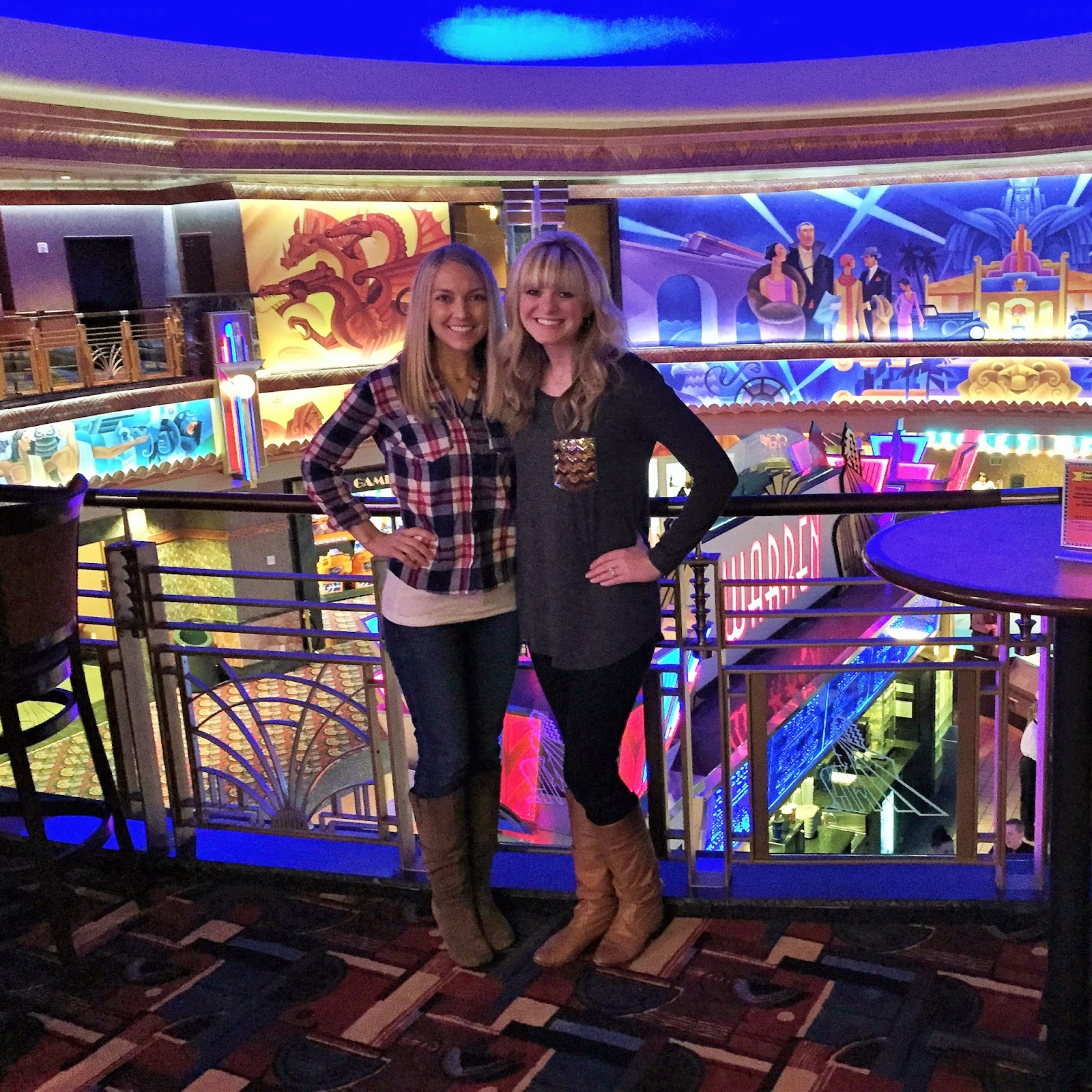 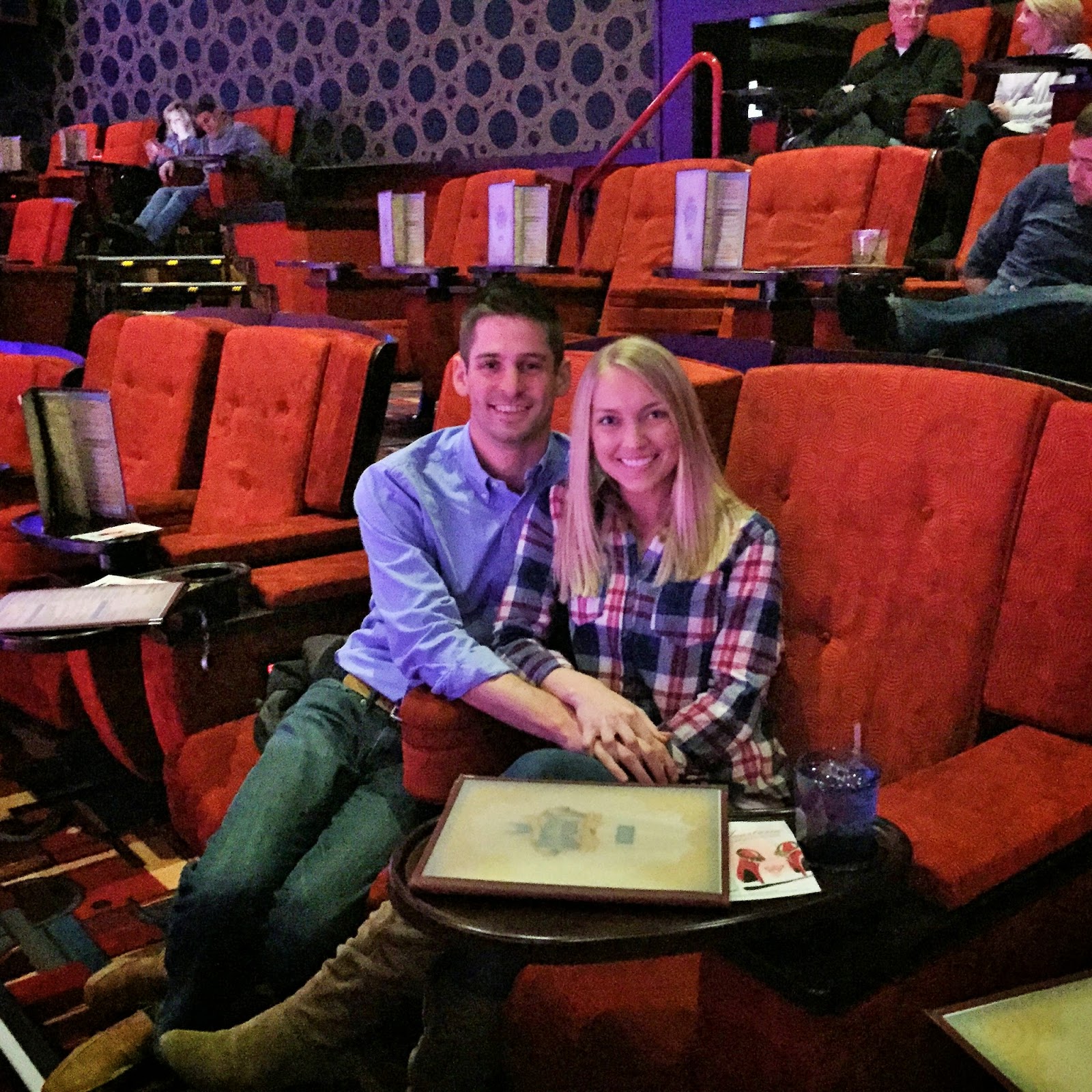 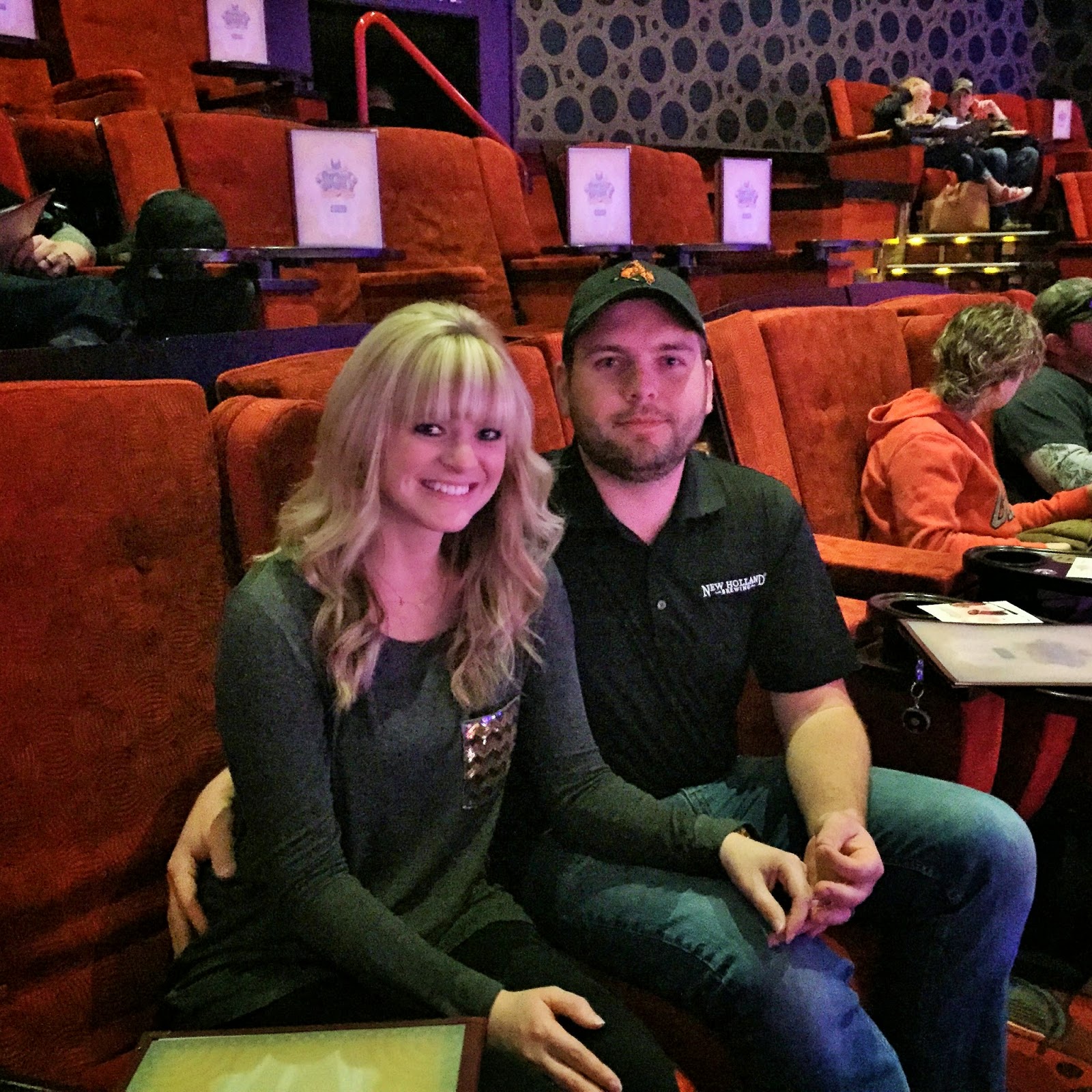 We had a server and were able to order food and drinks. We definitely took in the whole experience with dinner, drinks, popcorn and dessert! I absolutely LOVED the whole experience! I don't know if I will go to a "normal" theatre ever again!
That night we battled it out on the Ping-Pong table and dart board again. It was a fun way to wrap up the weekend! I just LOVED that one of my best friends took the time to come and see me for my birthday! Nichole, thank you for always being a GREAT friend to me!!
On Sunday, Trevor and I just had a lazy day! We took Nichole and Stephen to the airport, luckily their flight made it out on time even with all of the snow and crazy weather. We then went and ate breakfast with Trevor's dad and picked out some of their clothes to take on our ski trip. We then came home and watched more House of Cards! We literally spent the whole day watching except when we were at church! Seriously a lazy and unproductive day! Just what I like some times!!
Posted by Trevor and Jillian at 3:46 PM